Eureka, I would like to publish some preliminary results from my latest plating experiments. I am still interested in isolating Brettanomyces from different sources and still play around with different agar media to see what their impact is on the entire isolation process. The latest experiment I performed was a large scale bromocresol screening on different Saccharomyces yeasts to see whether bromocresol can be used to differentiate between Saccharomyces and Brettanoymces. My insight from this experiment: bromocresol green as a tool to differentiate between Brettanomyces (known to grow as white colonies) and Saccharomyces might only work within a small time frame. In addition, some Saccharomyces strains grew as white colonies in presence of bromocresol green (possible false positive strains).

Yet another approach is to add copper sulfate to the agar media to inhibit the growth of domesticated yeasts [Yakobson, 2010, Taylor et al, 1984]. Wild yeasts therefore should be able to grow in presence of copper sulfate. I wanted to give this agar a go to see if it can be used to differentiate between domesticated Saccharomyces strains and wild yeasts (Brettanoymces in my case). I started by adding 0.6 g copper sulfate to 1 L of Sabouraud agar and streaked some strains on the plates. As controls, plain Sabouraud agar plates were used to test the viability of the strains (not all plates shown). 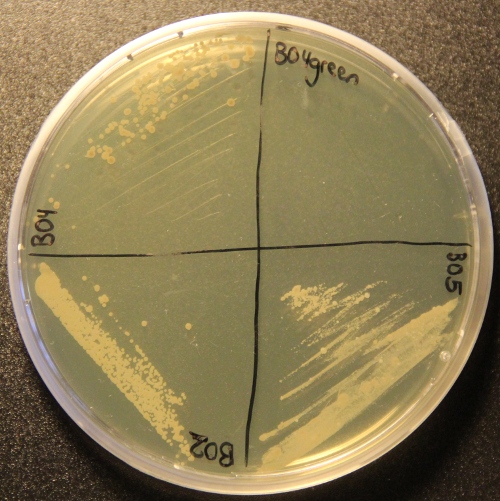 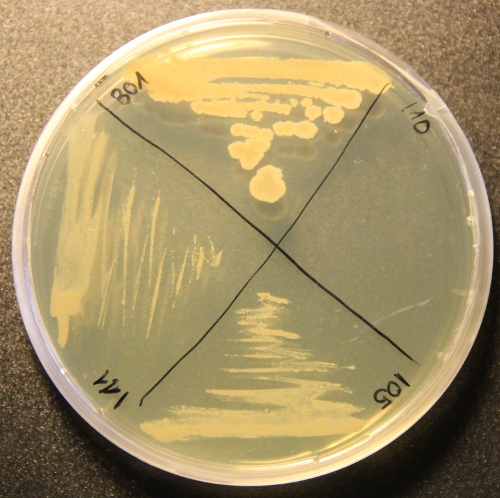 It seems to me that copper sulfate used at a concentration of 0.6 g per liter of Sabouraud agar media was not useful to differentiate non-domesticated from domesticated Saccharomyces yeasts. Simply because it could not inhibit the growth of most of the domesticated yeasts tested. As an outlook, one might increase the concentration of copper sulfate to levels where it impairs most of the domesticated Saccharomyces strains. Then test the Brettanomyces under the same conditions and see if they still grow or not. Maybe even change the Sabouraud agar to MYGP like published by Taylor et al. It is not clear to me yet if I even further investigate the use of copper sulfate.

Eureka, its time to share some tasting notes. I would like to apologize first for not posting in a long time. My uni life and the preparations for an upcoming yeast class already consume most of my spare time lately. Anyway, things now look a bit better and I even found some time to brew again. I would like to talk about a batch brewed in Spring 2012, my first Pumpkin Ale. The beer matured for quite a while now and I tried it before but it tasted very similar as described below. Unfortunately, most of the bottles were over carbonated and as soon as you opened the bottle, the whole sediment in the bottle got whirled up. Lets pour some Smashed Pumpkin Ale in a glass and lets see how it tastes like. 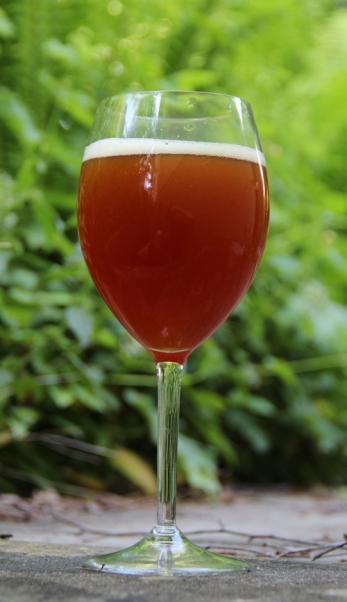 Aroma: Lots of spices (mostly nutmeg), light sweetness in there as well. Reminds me of a Christmas cookie. The spices are not overpowering as well. Nicely integrated and actually a very nice aroma profile.

Appearance: Orange-brown and hazy appearance, some chunks float in the liquid (parts of pumpkin and other stuff), nice white frothy head.

Flavor: Spicy and phenolic with some citrus and herbal background. Unfortunately I cannot taste the Christmas cookie on the palate. Flawless.

Overall Impression: Not the best beer I ever brewed nor the worst one. Judging from the tasting, its hard to tell whether there is real pumpkin in this beer or not (beside the pumpkin pieces in the glass). The spices (nutmeg, cinnamon and coriander) play the game here. Even some of the hops are detectable (used Cascade, Willamette and Columbus).

This was for sure an educational batch to see how hard it is to brew with real pumpkin and what impact the pumpkin has on the finished beer. In my opinion, brewing with pumpkin is not as easy as I thought. The small pumpkin pieces made it nearly impossible to get the pumpkin out of the beer again. Best seen in the pieces of pumpkin floating in the glass. On the other hand, the pumpkin did not add much to the aroma and taste. I am not too surprised about that because there are some “pumpkin” beers out there without any real pumpkin. The spices make the beer rather than the pumpkin. Thanks for reading and cheers.