Eureka, this is my hop crop report for 2012. The report from last year can be found here. I currently have four hop varieties: Hallertauer Mittelfrüh (since 2011), Northern Brewer (since 2011), Cascade and East Kent Goldings (both since 2012). And one plant of each variety. As the Hallertauer and Northern Brewer plants were in their second year, I hoped to finally be able to harvest some hops. I missed the right time to harvest the hops last year and got only a few grams of each variety. I bought two additional hop varieties this 2012 Spring (Cascade and East Kent Goldings) to have some very fresh aromatic hops available in the future. However, I did not expect a huge amount of both varieties in their first year.

Well, the two varieties from last year (Northern Brewer and Hallertauer) grew very well (Fig 2). The Cascade and East Kent Golding plants grew as well but nothing compared to the two older varieties. However, I could harvest some hops of each variety by the end of August 2012 and beginning of September. 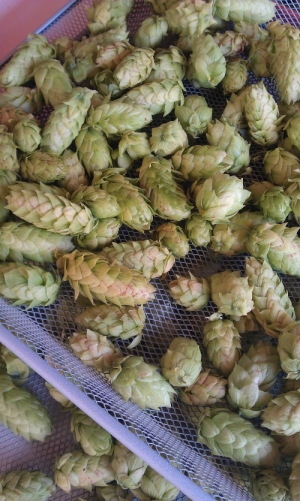 I already used 150 g of dried Hallertauer hops for a kind of harvest ale (#64 Belgian Vienna Brown Harvest Ale). The remaining Hallertauer hops are in a well ventilated place to oxidize them and use them for sour ales in the future. The Cascade, East Kent Goldings and Northern Brewer hops are in vacuum sealed bags in my refrigerator. For further use…

I am quite happy about the 2012 hop crop. I finally got some fresh hops and used them for a recipe already. By the way, the Belgian Vienna Brown Harvest Ale I was talking about previously was my first batch where I used hop leaves instead of hop pellets. However, I still prefer hop pellets because the hop leaves do not settle down to the bottom of the kettle during the whirlpool as easily as the hop pellets do.

Eureka, time for another post about a cool project. Today, growing your own hops in the garden.

As I am a very interested in gardening as well (like carnivorous plants and such), I purchased a Northern Brewer and a Hallertauer Mittelfrüh hop plant from Germany. After they arrived, I planted them into big buckets and installed a kind of climbing aid for the plants. I used normal strings for that. The hop harvest 2011 begun.

Northern Brewer plant on the left and Hallertauer on the right

After some watering and caring, the plants begun to grow.

The Northern Brewer plant grew very rapidly and I could collect nearly 200 g of hops in the Fall. Unfortunately I picked them too late and they already turned yellow and had a very musty smell after drying. But I vacuum-packed them anyway and are still in my refrigerator for a brew or an experiment. I really did not expect to have so many hops as it was the first year and the summer was very dry at my place. So I had to do a lot of watering…

The Hallertauer plant was a bit a troublemaker. After several weeks, I could observe a few lice and I used a soap-water-mixture to get rid of them. But they did not seem to care about that. So I added some alcohol to the mixture and sprayed the plant every second day until I finally got rid of the lice. The plant lost all its leaves in the region of the lice attack but continued to grow after all. Thats why there are now leaves at the lower part of the right plant in the picture on the right. And I could not harvest any hops as well…

In addition to the two plants, I purchased a Cascade rhizome and planted it right after I got it. But I could not see any growth after all. The rhizome is still in the soil and will try to get it to grow this year. I have to mention that I purchased the rhizome late in the season… But the hop season 2012 is near to begin and I’ll buy myself another Cascade plant for sure. Maybe some other cool variety like Centennial or East Kent Golding?

I hop(e) that I can brew my first harvest ale in 2012 with freshly harvested hops. That would be awesome.