Eureka, sharing another recipe with the world. All started with the need to get rid of some ingredients such as leftover hops, malts and yeast. My goal was to brew a hop-forward not too bitter Amber Ale. Something for a general public. On the other hand to use Wyeast’s 3789 Trappist Blend. According to Wyeast, this blend consists of Saccharomyces and some Brettanomyces strain(s). Some say this blend consists of the yeasts used by Abbaye Notre-Dame d’Orval. I chose this blend to be suitable for such a beer because of three reasons. First, serving the fresh beer will not have too much of Brettanomyces character and be more accessible for a general public. Second, the Brettanomyces might help to decreases the body of this rather malty beer and improve the hop aroma. Third, further maturation should give the Bretts enough time to put their fingerprint on the beer aroma/flavor and maybe be more for the Brett lovers.

02/10/2013: Brew day! Nothing special to add here. Basically followed the recipe above. 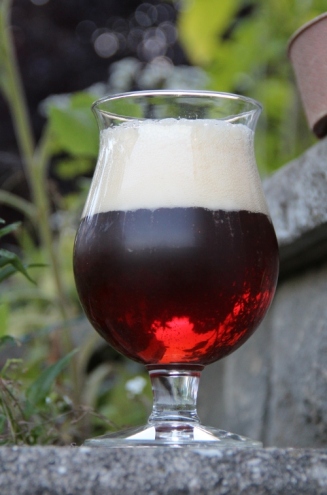 Flavor: Very fruity (tropical fruits) with mango, oranges and some citrus character. Subtle maltyness and very well-balanced (malt and hop). (Tasting July: Fruit character not as prominent anymore. But a bit of Brett twang is definitely there now, balance is now more on the hop/bitter side, malt character vanished).

Overall Impression: This is a very nice brew. It is not overly bitter but has a huge tropical fruit aroma. And I am not the only one that likes this beer. I shared some bottles with friends and they loved it. On feedback I got was like “get this brew on tap”. The character of this beer changed over the last weeks and you definitely get a certain Brett character now. I will further mature the beer and see how much of Brett it will get.

I already re-used the base recipe for another batch. Left the Carabelge aside and used a different kind of yeast (Wyeast’s American Ale strain) to see, how much the beer depends on Wyeast’s Trappist Blend. Sure the Brett character will not be there but I currently have way enough beer to mature anyway (and a lot of stuff that will require maturation is still fermenting). By the end of 2012, I had 508 bottles of beer stocked in my maturation cellar (equal to 269 L of beer). This number might be even higher now because I mature some beers in kegs. Anyway, this batch was a complete success: Got rid of some ingredients, was fun to brew, got a nice beer in the end and my friends liked it as well. Cheers and thanks for reading