Eureka, second yeast kinetic post. I further discuss Monod growth kinetic models with the inclusion of some inhibition parameters. I would advice you to first read the yeast kinetic introduction post if you haven’t done so already. One inhibition phenomena has been studied on Brettanomyces by looking at growth behaviour under aerobic and anaerobic conditions and the influence of initial acetic acid. All the values of the coefficients are taken from a publication written by Yahara et al (2007). The goal of this publication was to investigate the glucose utilization rate of Brettanomyces bruxellensis at different acetic acid levels under aerobic and anaerobic conditions. The authors first conducted experiments and then proposed an extended Monod model to simulate the growth kinetics under different conditions.

I would like to start by discussing the basic equations used for the extended Monod model used by Yahara et al (2007). The basic Monod equations have been discussed in my introductory post.

The first differential equation for the specific growth rate µ is now slightly modified to include an inhibition factor Ki and an exponent q. The authors cultivated Brettanomyces bruxellensis under aerobic and anaerobic conditions with varying initial acetic acid concentrations (1, 2, 3 and 4 g L-1). The substrate (glucose) and inoculation rate were the same throughout the whole experiments. Two products were included into the model, ethanol (P1) and acetic acid (P2). The only difference in the Monod model here are two different yield factors (YP/X) and one equation for ethanol (dP1/dt) and one for acetic acid (dP2/dt). µmax was obtained the same way as I showed in the introduction post. All the remaining coefficients were obtained by iterative approaches.

I would like to show some of the growth curves published by Yahara et al (2007) which I obtained by using their coefficient values running the model using Berkeley Madonna. 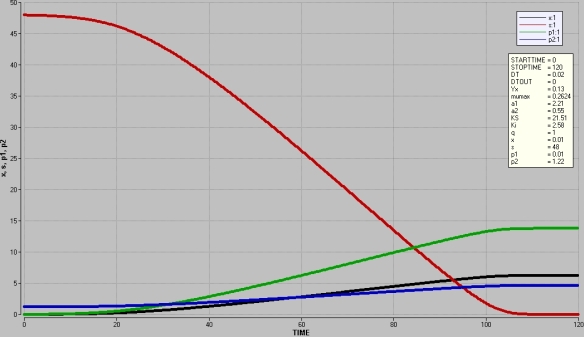 The first graph shows the growth one can observe under aerobic conditions and an initial acetic concentration of roughly 1 g L-1 (Fig 1). The glucose is fully metabolized by the yeasts within 100 h of cultivation. It can also be observed that Brettanomyces produce ethanol and some acetic acid. 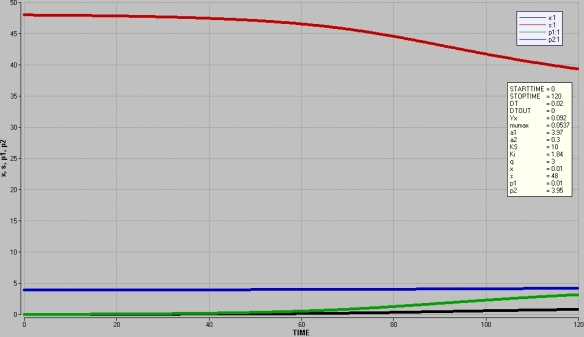 The next graph shows the growth under aerobic conditions and an initial acetic concentration of roughly 4 g L-1 (Fig 2). In this case the glucose is not fully metabolized after 100 h as previously shown (Fig 1). The Brettanomyces still grow but at a slower rate. Still some ethanol is produced and a minor amount of acetic acid.

From these two graphs one can already conclude, that the amount of initial acetic acid in the media seems to significantly impair the growth of Brettanomyces. At higher acetic acid levels the Brettanomyces seem to grow substantially slower.

The next graphs show the growth curves in absence of oxygen again with different initial amounts of acetic acid. 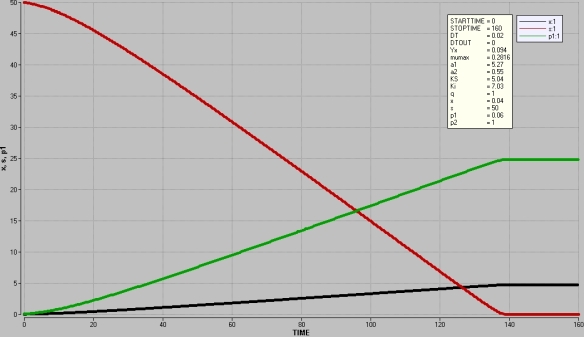 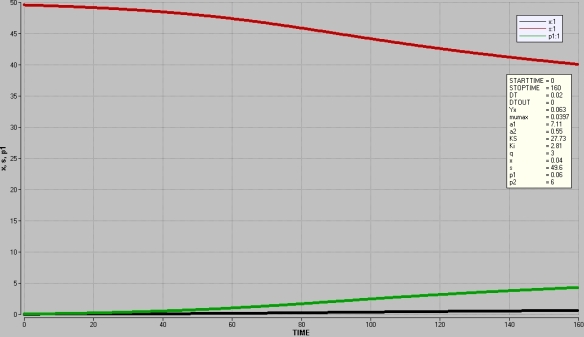 At higher initial acetic acid concentrations and anaerobic conditions, Brettanomyces still grow but again at a slower rate (Fig 4). A lot of the glucose is not metabolized after 140 h of cultivation. The yeasts still produce some ethanol but the growth curve of the biomass stays roughly the same. Indicating a very slow growth rate.

For the brewers: Brettanomyces slow grower under anaerobic conditions, form more ethanol but no acetic acid. Acetic acid is only produced if oxygen is present.

One has to keep in mind that this model can’t describe everything. For example, if one runs the model using a high substrate concentration, the Brettanomyces will continue to grow even in presence of very high ethanol concentrations. In reality, Brettanomyces have an alcohol tolerance as well where they stop growing. However, this can easily be included in the model. This example was just to show that one has to be careful with models.

I hope this post was interesting to read and gave you an idea how models can be used to describe growth behaviours under inhibitory conditions.

The next post about yeast kinetic models will be concerning yeast calculators.

3 thoughts on “A glimpse into Brettanomyces growth kinetics”