Eureka, another Brettanomyces post. This time about a feasibility study if you can freeze Brettanomyces like any other Saccharomyces strain. I would hereby like to discuss my latest results.

Some isolates consisted of more than one strain which were separated during trial runs with bromocresol green (not published). All these different strains were frozen separately.

In mid November 2012, the Brettanomyces were taken out of the freezer and transferred into fresh YPD media. After two weeks some of the yeasts showed signs of growth such as turbid media and gas production. In the end all media showed signs of activity and formed off-white coloured sediments. Both yeasts isolated from the Cantillon beers even showed signs of pellicle formation (not shown). Although activity could be observed it still has to be evaluated if the activity originates from the yeasts and not any contamination. Due to lack of time the yeasts remained in the YPD media for nearly two months until further experiments could be conducted.

Some micrographs showing the yeasts from YPD liquid cultures before freezing and afterwards.

Typical elongated cell shape of Brettanomyces visible (Fig 1 and 2). Even some hyphae formation (Fig 2). Somehow the colonies in Fig 1 look smaller than the ones in Fig 2 although both pictures were taken with the exact same setup.

Concluding from the micrographs shown (Fig 1-3), Brettanomyces yeasts could be found in the YPD media after reviving them. Although Brettanomyces yeasts could be observed in the microscope observations still does not prove that the yeasts are viable. Liquid cultures were first streaked on some Sabouraud agar plates and incubated at room temperature until colonies were visible. Colonies were then picked from the Sabouraud plates and streaked on Sabouraud agar with an addition of bromocresol green.

Some yeasts had different morphologies like WY5526 B. bruxellensis on bromocresol green containing agar media (Fig 4). Some colonies grew as green, others as white ones. For the next agar platings, each a white and green colony were picked.

One strain of Cantillon’s Kriek and the strain isolated from a 3 Fonteinen Gueuze grew in different morphologies (white and green colored colonies) as well and were treated separately for the next agar platings. Please further notice that WY5112 Brettanomyces lambicus was not streaked on Sabouraud Bromocresol green due to a mold contamination on the first Sabouraud plate. However, typical colonies of B. lambicus could be observed (not shown).

The two colonies that grew differently on the first bromocresol green agar from the Cantillon’s Kriek isolate grew again as white colonies (Fig 6).

The same is true for the different morphologies from a 3 Fonteinen isolate (Fig 6, 7). The Brettanomyces strain(s) isolated from WY3191 Berliner Weisse blend formed colonies as well (not shown).

It could be shown that all the frozen Brettanomyces strains formed colonies on Sabouraud agar. Some of the isolated yeasts grew in different forms (white and green colonies) but such a differentiation could not be observed after a second streak on agar media. This is not the case for the yeast strain isolated from Cantillon’s Kriek (B04 green) which grew in green colonies on every plating.

The differentiation between Brettanomyces and Saccharomyces based on bromocresol green and its issues will be covered in a future post. One could already observe in these platings that some of the yeast colonies grew as green colonies in a first run but grew as white colonies in a second run again.

Micrographs of the colonies

At last some micrographs of the colonies. 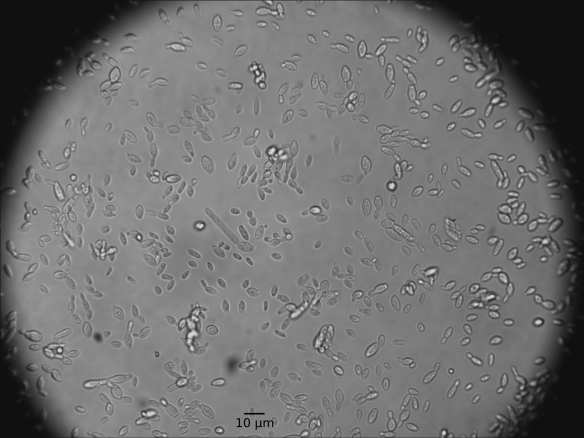 The two different samples of WY5226 B. bruxellensis look very similar (Fig 8, 9). The differences in color appearance on the bromocresol green might be due to some issues of bromocresol green as an indicator for Brettanomyces and wild yeasts. As mentioned already, more about that in a future post.

Fig 10: Brettanomyces from Girardin Gueuze (B01) 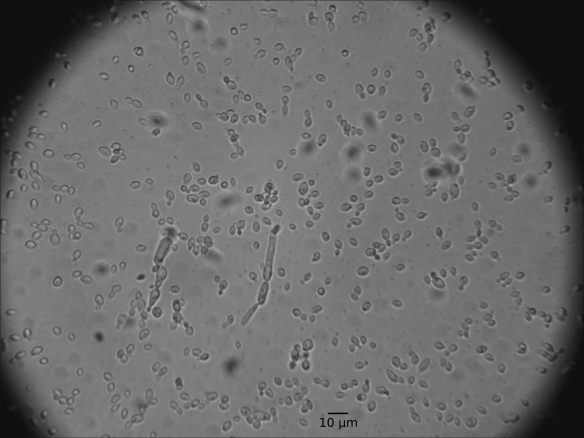 Both colonies from 3 Fonteinen isolate seem to be Brettanomyces (Fig 11, 12). Hard to tell based on the morphology of the cells if the two samples are the same or not. 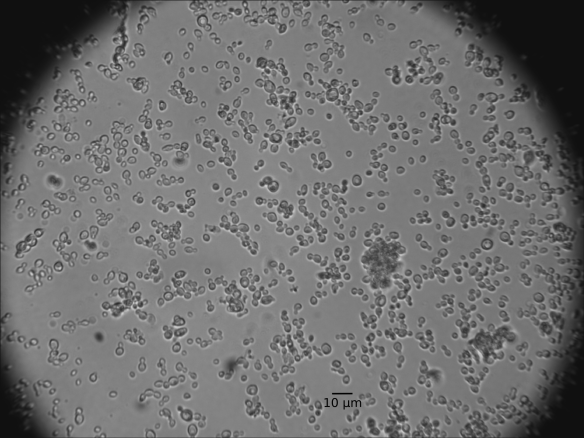 Not a lot of elongated cells were visible in B04_1 (Fig 13) like in B04_2 (Fig 14). Maybe these two samples are not the same strain of Brettanomyces. Maybe B04_1 is not a Brettanomyces strain. Further studies are necessary. 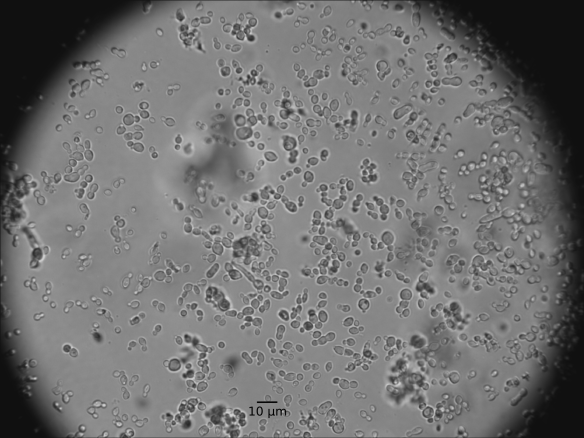 Some elongated cells visible in B04_green (Fig 15). Yet a lot of the cells looked like Saccharomyces cerevisiae. Might be a mixture of S. cerevisiae and Brettanomyces.

Lots of hyphae visible in one of the isolates from Cantillon’s Kriek (Fig 16). Very typical for Brettanomyces.

On the other hand, in the second sample of B04_white not that many Brettanomyces cells visible form hyphae as shown in Fig 16 (Fig 17). Yet again, maybe these two samples are not the same strain of Brettanomyces. Further studies necessary. 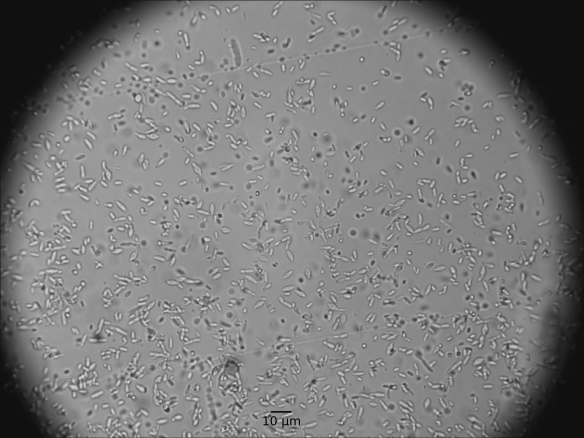 The second strain from Cantillon’s Lou Pepe looks different from the first one shown in Fig 18 (Fig 19). Hard to tell if the second sample B05_dark_2 is another strain than B05_dark_1 or not.

Brettanomyces were visible in most of the micrographs shown above. However the shape of Brettanomyces can differ significantly. The experiment strongly suggest that it is possible to freeze Brettanomyces and successfully revive them. In addition, it could be shown that some of the frozen samples might contain further strains of yeasts. Additional experiments are necessary to further look into this possibility.

The cells shown in Fig 21 are no yeast cells. Theses cells look like Lactobacillus. Interestingly, these bacteria cells were in the freezer as well (therefore possible to freeze Lactobacillus like yeast cells as well) and they grew on bromocresol green containing agar.

Enough with the experimental part. I am very happy about theses results. Took me some time to do all the platings, micrographs but I have the feeling it was all worth the efforts. At least now I know that I can easily freeze all my Brettanomyces strains I have (well over 20) without any worrying. The only thing to keep in mind here is that theses yeast might take some additional time for reviving than normal S. cerevisiae strains. Some preliminary results even suggest that it is possible to freeze Lactobacillus like you would any yeast cells.

The next post will be about another big yeast experiment. Stay tuned and thanks for commenting!