Eureka, another post about a Brettanomyces isolation. Other posts about the same topic can be found here. The beer we are talking about today is the Kriek made by Cantillon. Further information about the Kriek can be found on the Cantillon webpage. Got myself a bottle (bottled on 23 December 2009) and decided to have a look at the sediment of the beer. Maybe some tasting notes first. 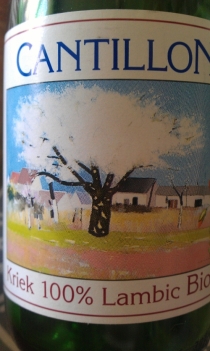 Aroma: Lots of horse blanket and very funky. Could not detect any cherry flavor.

Appearance: Red appearance, pink foam. Some particles from the bottle in the glass.

Overall Impression: Very well made. Although the fruity character is gone. The beer was bottled 2.5 years ago. Maybe the fruitiness vanishes with time? No idea if this is true. All in all a very nice brew. My rating: 95/100. If you can get yourself a bottle. One of the best Krieks I had so far. Although no pronounced cherry aroma.

05/17/12: Streaked some of the bottle’s sediment on a Sabouraud agar plate and incubated it at room temperature.

06/02/12: Colonies were visible on the plate (Fig 2). Only one kind of colonies. Seem to me like very typical yeast colonies. Took a colony from the plate in Fig 2 and re-streaked it on another plate. The colonies now looked quite different as you would expect from normal brewer’s yeast.

Next, look at the colonies under the microscope. 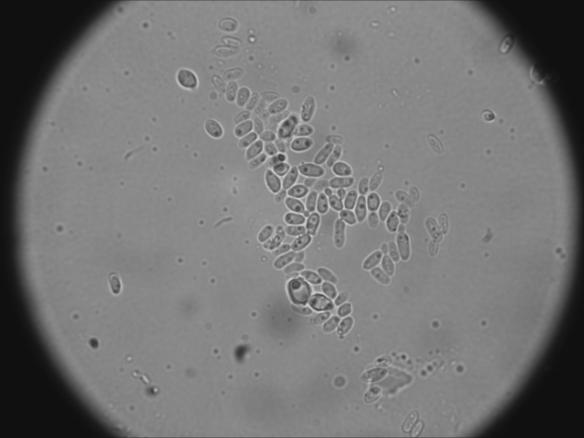 These cells are yeast cells for sure (due to the size and appearance). In my opinion those cells belong to the Brettanomyces species. And they look very similar as the Brettanomyces in Wyeast’s Roeselare Blend (shown here in the pictures at the bottom). Well the cells could be something different than Brettanomyces for sure. However, from the smell of the plate, the look of the colonies on the agar plate and micrograph and the time it took for colonies to appear, I would assign these cells to Brettanomyces.

To summarize, I could isolate Brettanomyces strain(s) from a Cantillon Kriek nearly 2.5 years after it was bottled. The strain goes into my library as B04 (Brettanomyces 04).

The next post concerning a Brettanomyces isolation will be about another Cantillon beer. Stay tuned!