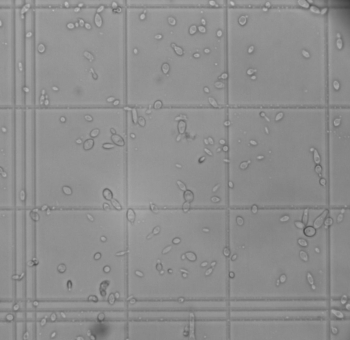 Maybe you already observed that the cell morphology are very inhomogeneous (Fig 1). The following pictures are all Brettanomyces bruxellensis with all sort of morphological appearances. I have to apologize for the bad quality of the pictures. But I do not own the appropriate objectives for taking pictures. I hope to take some pictures in the lab with a far better microscope in the future.

So far for the lower magnification. In my opinion there are at least two different morphologies. There are circular cells with a dark spot, or two. And there are the slender cells like the ones in the upper left corner in Fig 4 that stick to other cells. The next pictures are taken at a higher magnification than the ones above. 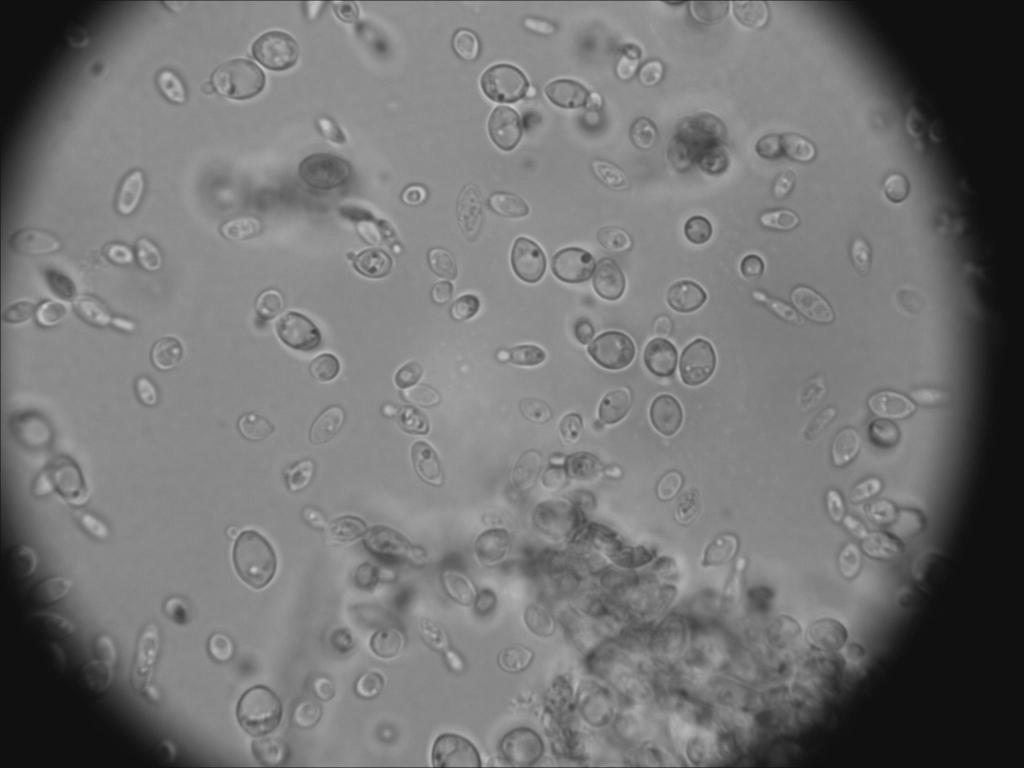 Some cells look like small lemons. Or at least not perfectly circular (Fig 5). And these cells have a dark spot and some kind of vacuole. These cells look way different from normal Saccharomyces cerevisiae (brewer’s yeast). I have never observed a dark spot in S. cerevisiae before. Maybe this spot is something common in Brettanomyces? We will see about that as we look at Brettanomyces lambicus in a future post. And I have no idea what this dark spot could be. 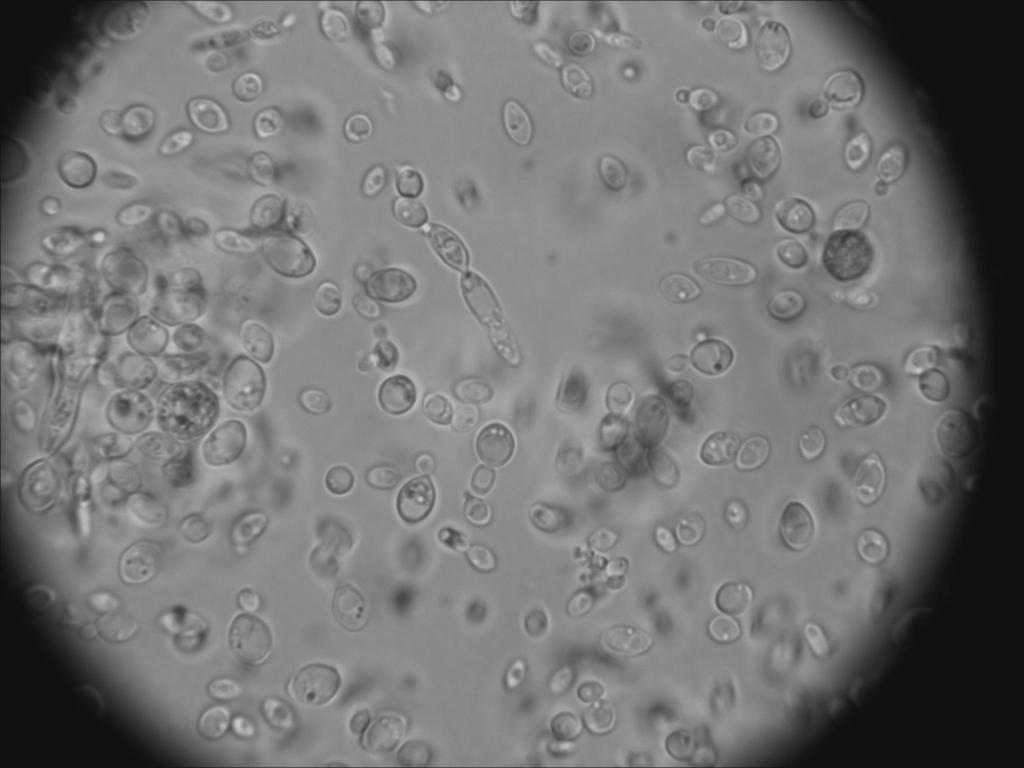 It gets even more interesting. Lets have a look at the cell in the middle in Fig 6. The one connected to another cell. The lower cell, with the dark spot, looks like every other cell with a spot. But this one seems to be elongated. I assume the elongated cells are just elongated circular cells. This would make sense since there is only one strain of Brettanomyces in there (I hope). But some cells look like S. cerevisiae. Maybe there are some S. cerevisiae in Wyeast’s Activator package?

Here is another elongated cell in the lower left corner (Fig 7). And the typical dark spot can be observed again. 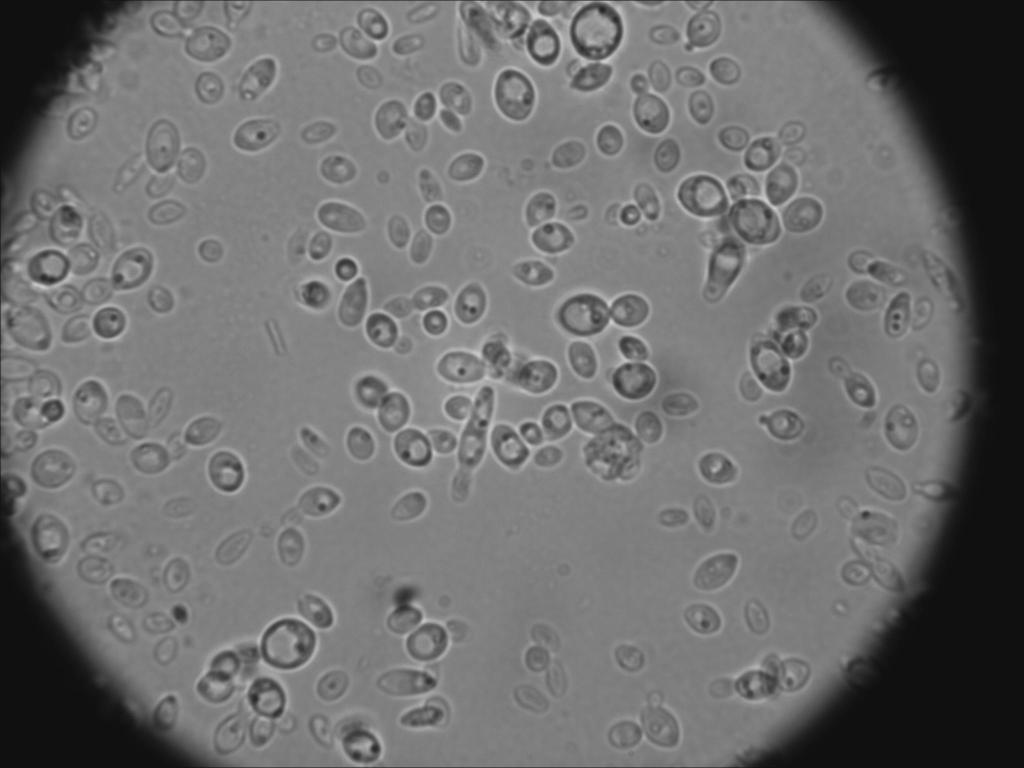 This pictures makes it easy to observe the kind of vacuole (Fig 8). And right in the middle of the picture is a cell with two dark spots.

And here is another shape to observe (Fig 9). This Brettanomyces strain tends to adhere to other cells. What you get is a kind of network of different cells sticking togheter. And the size of the elongated cells is way bigger than all the other cells around them. I have some sort of hypothesis here. I could imagine that two Brettanomyces cells somehow elongate to form bigger cells?

Maybe some of you remember the pictures I took from a beer I fermented with a kind of souring bug. The first one can be found here, the second one here. Now I am pretty sure that Brettanomyces are in the dregs of the BFM La Torpille. The cells in the pictures there look very similar to the ones in Fig 9 and Fig 10. 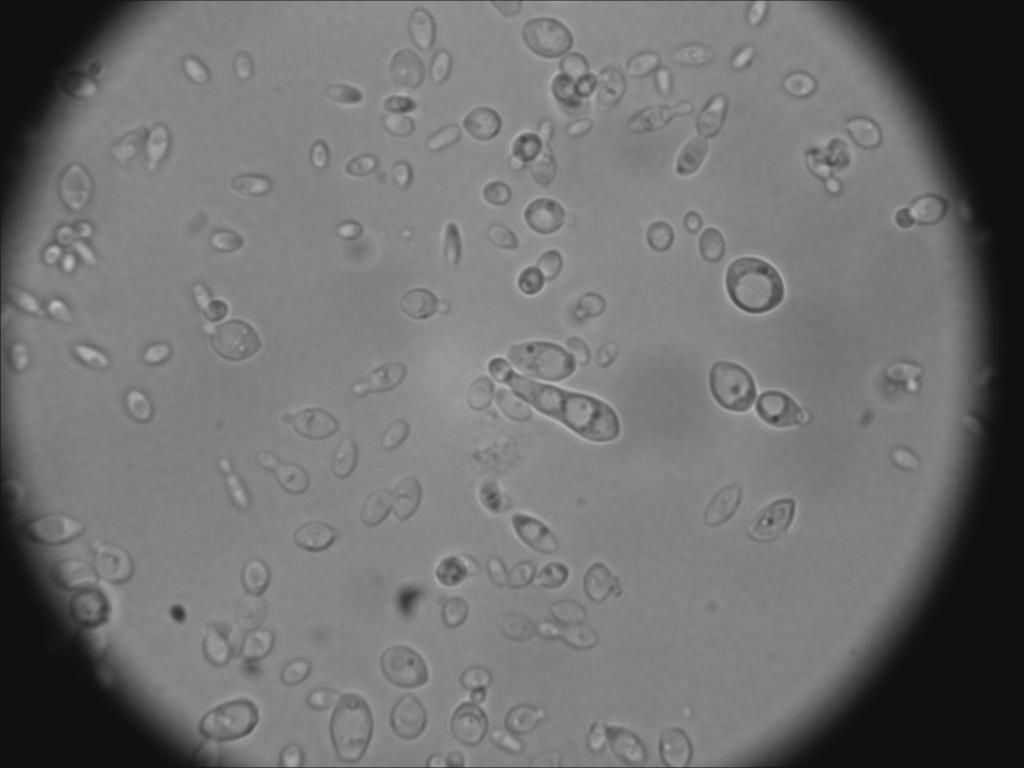 And there is yet another cell that looks like two cells kind of fused (Fig 11).

I have additional pictures but nothing interesting to see there that can’t be observed in any other pictures above. I am very happy about the pictures because there are some structures which I could not observe in other published pictures of Brettanomyces. One in particular are the adhering cells. Quite amazing stuff in my opinion.

I end this post with a preview about stuff I publish in the future. First, there will be a post about microscopy pictures of Brettanomyces lambicus from Wyeast. Second, two posts about the agar plates with the two Brett strains. And there are some further recipes to talk about as well. So stay tuned. Some really interesting stuff is coming up soon.