Eureka, the hunt for souring bugs continues. This post is about the latest results from the attempt to isolate some souring bugs out of the dregs of a Girardin Gueuze. The isolation process can be found here, and the first part of the results are here.

What happened in the first place was the following. I plated some of the liquid of the starter where I dumped the dregs from the Girardin Gueuze into.

The plate showed new colonies after 21 days of inoculation (Fig 1). There were some white and wavy colonies visible and some very small ones as well. The beige colonies on the plate are the colonies that I determined to be a sort of bacteria in the previous post. So I took one of the white colonies and streaked them on a separate plate. By the way, the very small circular colonies visible in the upper part of Fig 1 were a kind of bacteria again. I assume that these are Pediococcus. 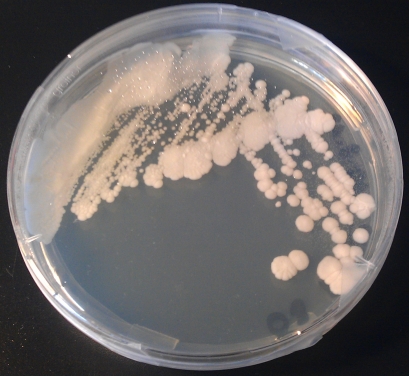 The plate showed just one kind of colonies, white and wavy colonies like the original colony (Fig 2). Why I re-streaked this type of colony is very simple because I already expected that this yeast (determined with a microscope before re-streaking) is not a Saccharomyces strain. So I took another picture of a colony from the plate in Fig 2.

Now again a very difficult task. What kind of yeast are these colonies? This is a kind of yeast that stick together and are more oval than circular. My guess is that these yeasts are no Saccharomyces but maybe a kind of Brettanomyces or an other kind of yeast. What I did next is a fermentation test like I did it with the white colonies I isolated from the 3 Fonteinen dregs in the previous post in Fig 3 and 4. I will post about these two fermentation test in the future and I can already tell that the results are already beyond my expectations. Well, this will be the last results about the isolation of bugs from the Girardin Gueuze with the Sabouraud agar. The different plates are still incubating but I will put them in the refrigerator soon to keep them for a longer period of time.

What happens next at the souring bug front? As already mentioned in the 3 Fonteinen post, the next post will be about the last results of the isolation process of Wyeast’s Roeselare Blend. Then some really awesome stuff: I had a look at some pure Brettanomyces strains from Wyeast (B. lambicus and B. bruxellensis). And what I saw there was just amazing. I took a lot of pictures to catch the different cells there were and try to blend them all together and make two really interesting posts. And of course, the two Brett strains are already on some agar plates as well. To summarize, the next posts about souring bugs will be about the Roeselare Blend, some pure Brettanomyces strains and the fermentation tests. Stay tuned.