Eureka, I decided to extend the series about wild bugs because I have a lot of new pictures and did some further streaking. A short summary about the previous plates seemed to be very difficult and that’s why I went for the continuation. What happened before? All begun with some souring bugs I had. I plated some of them on Sabouraud agar plates and had a look at the different colonies there were. Some of the bugs came from bottles like 3 Fonteinen Geuze, Girardin, Wyeast’s Roeselare Blend and BFM. If you are new to this series, you could go through the previous posts first. What happened in the meantime? First of all some corrections and further information. I found out that I misspelled the name of the 3 Fonteinen Geuze. The correct form (as written on the bottle) is Geuze and not Gueuze. Both forms, Geuze and Gueuze seem to be correct. But I should use the name as it is written on the label… Another information is about the BFM brewery in Switzerland. Some of you might remember that I had a look at a beer which I made using some dregs of a BFM beer. What I could observe were a kind of Brettanomyces. One reason why I dared to identify these cells to be Brettanomyces was the information I got that BFM does not use any kind of Brettanomyces (the brewmaster told me that). This changed in the meantime. I got informed that BFM has a Brettanomyces “infection” in the brewery and that all the beers have a Brettanomyces character. I already suspected that because all of the beers I tried from the BFM brewery had a very distinct character. So far about further background information.

I will try to make it as easy as possible to follow the different experimental stages and therefore split the different bugs between different posts. And there will be just beer related bugs, no kefir or kombucha bugs anymore. Another change I made is the size of the pictures. The next pictures will be in their original size to make it easier for you to follow my observations. One thing that I am still working on is to implement some sort of scale for the pictures to get an idea about the size of the individual cells.

Today is just about the bugs from the 3 Fonteinen Geuze dregs I isolated a few weeks ago. I just plated the dregs on a Sabouraud plate and waited until some colonies arose. The plate looked as following after 21 days of incubation at room temperature: 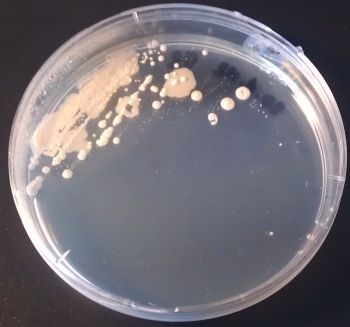 This time I looked at the small colonies as well and there I could see some kind of circular bacteria (Fig 2). I had to use my oil immersion objective to see the bacteria and this makes it even more difficult to see anything. But there is something to see. There are some circular cells to see that form a kind of tetrad. J. Liddil describes the Pediococcus in “A Liddil Lambic Lession” to be a spherical and tetrad-forming bacteria. These description match the bacteria that are in Fig 2. So the small colonies on the plate in Fig 1 could be Pediococcus. 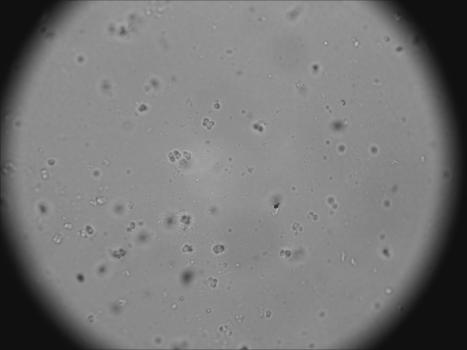 I transferred a white colony from the plate in Fig 1 on a new plate and incubated it as well (Fig 3).

The colonies that arose on the plate were white again. But the morphology was quite different to Saccharomyces. Colonies of Saccharomyces tend to have a bit of a glossy appearance and these colonies don’t. Further on, these colonies were whiter than typical Saccharomyces colonies. I have to mention that I am very proud of my striking technique to get such beautiful plates… Next step, microscopy. I took a colony and had a look at the cells.

First of all, the cells have the size of typical yeast cells. But some of them look very different to the circular shape of Saccharomyces. Some cells look like brewer’s yeast, others don’t. I assume that the colonies on this plate are either not pure or the yeast in there has different morphological appearances. Well, I can’t tell what I got myself here again… Maybe some kind of wild yeast? Could be Brettanomyces or Kloeckera or….

Comparing the cells with other pictures from the web is quite difficult since the available pictures are very limited. That’s one of my goals to build up a kind of picture library of different wild bugs. But that will take me some time because I have to get some experience first with all the different souring bacteria and yeasts.

I already started a fermentation test with the yeasts from Fig 4 to see what the starter will taste like. I will promise to report about the fermentation tests. Well,that’s all I planned to do with the bugs from the 3 Fonteinen Geuze so far until the results from the fermentation test. The next posts will be about the Girardin Gueuze and Wyeast’s Roeselare Blend. Further on, I planned to do my All-Brett brew the next weekend and will ferment it with Wyeast’s Brettanomyces lambicus and Brettanomyces bruxellensis. And there are still some fresh Sabouraud plates waiting for both Brettanomyces strains… Further experiments with both Brettanomyces strains are planned as well to get to know these strains a bit. Stay tuned!