Eureka, I finally did it. After several hours of tasting, collecting data and other stuff, I am now able to post the first results of my wheat yeast comparison experiment. The experimental design is already posted in a previous post. Todays post is all about yeast performance, the tasting of the different beers will follow in the second part. I split the results in two parts to make it easier to read and because the tasting part is not yet written. Lets begin.

As the Cooper’s yeast showed molds in the starter, the yeast was excluded from the experiment.

The original gravities and the efficiencies (Sudhausausbeute) of the three different batches were quite similar. The used brewing technique seemed to be more or less consistent over three batches. I already observed a higher efficiency for higher batch sizes in other brews before.

Fig 1: Apparent attenuation levels of different wheat yeast strains compared with stated attenuations of the yeast suppliers. n = 2 (except for the #3942 (n=1) and #3068 (n=3)). No numerical attenuation levels stated for WB-06, Danstar Munich and Burgdorfer Weizen.

As shown in Fig 1, all the yeasts reached the apparent attenuation as specified by the manufacturers. The measured apparent attenuations seemed to be slightly higher than the specified values. Further information about the #3068 and the huge error bar follow below. The measurement of the #1010 American Ale and Burgdorfer Weizen were the same in both fermenters thus no error bar. The #3942 Belgian Ale yeast fermented just one batch, thus n=1 and no error bar as well.

The highest attenuative yeast was the dried yeast WB-06, the lowest the isolated Burgdorfer wheat yeast from a bottle. It can be concluded that a wheat yeast has an apparent attenuation of about 75%.

The attenuation levels of the #3068 Weihenstephan in the three different batches compared with the specified attenuation level from Wyeast is shown in Fig 2. The #3068 was used as a reference yeast strain in all the three batches. 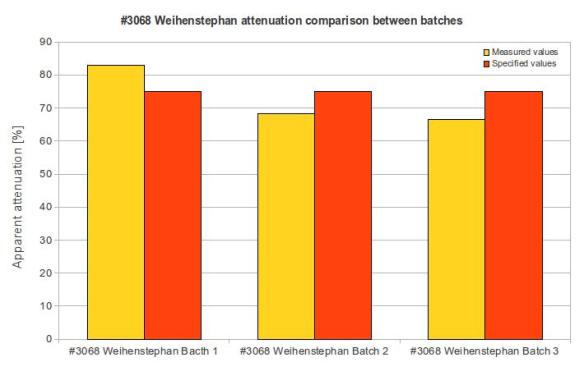 Fig 2: Apparent attenuation levels of the #3068 in the three different batches

It can be shown that the #3068 in the first and second batch differ significantly. The attenuation in the second and third batch were quite similar. To compare the attenuation level of the #3068 with the other yeasts, the author used the average of the three batches and used the standard deviation for the calculation of the error bars. This is the reason for the big error bar in Fig 1 for the #3068 Weihenstephan yeast. One explanation could be that the fermentation was not over yet and the terminal gravity was not at its lowest point. Another, the source of the yeast. The yeast for the first batch was isolated from a previous batch of wheat beer. The yeast for the second batch was used from the first one, and for the third one from the second.

The author concludes, through the comparison of the different average-attenuation levels of the two yeasts, that the attenuation level of #3068 Weihenstephan and WB-06 differ significantly.

To summarize, the apparent attenuations of the yeasts tended to be higher than the specified values. The WB-06 yeast reached the highest attenuation, the isolated Burgdorfer wheat yeast the lowest. A wheat yeasts attenuates in the region of 75%. The #3068 attenuated differently in the three batches. The #3068 Weihenstephan and the WB-06 had not the same apparent attenuation levels. Thus it is quite probable that the two yeast strains are indeed not the same.

That’s all about the wheat yeast performance results. I am a bit surprised about the different attenuation levels of the WB-06 and the #3068 Weihenstephan strain. Maybe the drying process of the yeast could influence the attenuation level in some way? The final word will be spoken after comparing the two beers in a tasting. As already mentioned, the tasting results will be posted in a different post soon. I still figure out how to present the different results in a comfortable way. Stay tuned.