Eureka, after some recipe posting now a post that is right down my alley. I did some agar pouring, streaking and finally some microscopy analysis of different colonies. So this is the first post out of five about bugs. Today, pictures of bugs from commercial sour beers.

01/30/2012: I plated the following bugs on Sabouraud plates: BFM La Torpille dregs, 3 Fonteinen dregs, Girardin dregs, Water Kefir liquid, Lactobacillus from a apple juice starter for a future Berliner Weisse, my Heidelberger Kellerbier yeast, #1056 from a starter for an IPA batch, Flanders Red, Kombucha liquid, #3787 Trappist yeast from 2011 and 2010 and I put the last plate outdoors for about six hours to collect some wild yeasts.

The plates were stored at room temperature for approximately three days until colonies appeared. The following pictures were taken after three days of inoculation.

I can already tell, that I did not collect any kind of wild yeast with my last plate, just some beautiful molds…

I dumped some La Torpille dregs in a blended Belgian style beer (#39 Another Reason to Live) a while ago and poured myself a sample from the fermenter to taste and streak. 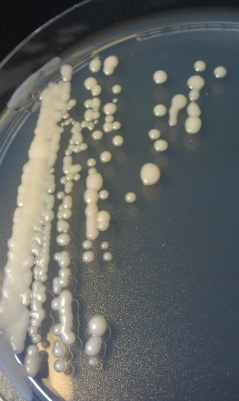 I guess it is normal brewers yeast due to the size, morphology and time the colonies needed to grow. If this is a yeast, then it must be #3522 Belgian Ardennes or/and #3787 Trappist High Gravity. 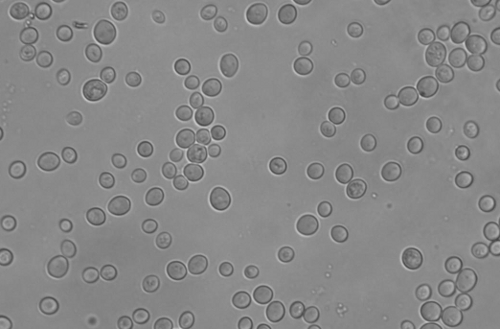 And the microscopy picture above proves my guess. These colonies are cells of Saccaromyces cerevisiae. Unfortunately not Brettanomyces as hoped… Will use a different media next time to inhibit the growth of brewers yeasts.

Isolated bugs from dregs of a 3 Fonteinen Oude Gueuze and streaked them as well to see what I got. The wort I used for isolating the bugs smelled very acidic and was kind of sticky. The stickiness might come from the work of Pediococcus.

And I could observe just one kind of colonies again: Off-white, wavy, irregular, not glossy, 5 mm diameter. I was already aware that these might be something different than brewers yeast because they tend to grow in circular colonies and not wavy-ones. 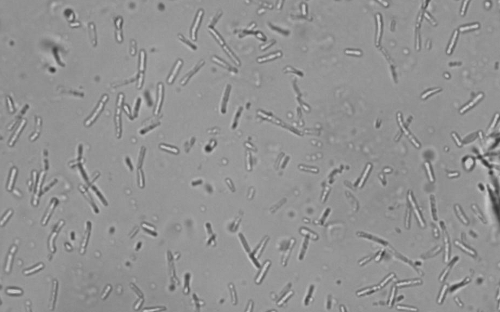 And the microscopy revealed that these colonies are in fact bacteria. Some sort of Bacillus. My guess is that these are maybe Acetobacter due to the acidic smell of the wort. I have to apologize for the poor quality of the pictures, it is quite tricky to get some pictures with my camera of bacteria due to their very small size. Well, no yeasts or Brettanomyces. 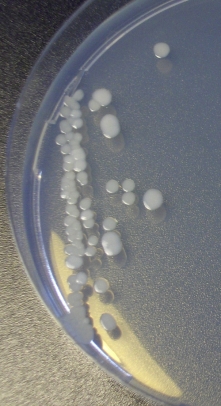 And at last, some bugs from a Girardin Gueuze. The starter was sticky, like the 3 Fonteinen one as well, but the acidic note was subtle. Once again, just one kind of colonies:

These colonies were circular again but had a different color than the ones from the BFM dregs (which were Saccaromyces cerevisiae). Maybe Brettanomyces this time?

And once again, these colonies are bacteria not yeasts. And they look very similar to the ones from the 3 Fonteinen colonies.

Although I could not detect any colonies of Brettanomyces so far, I learned, that I have to use a different kind of agar to prevent the growth of Saccaromyces and bacteria to give the Brettanomyces a chance. And I already have a different media in mind…

That’s all so far about the bugs from the dregs. Next post about agar plates will be about the water kefir culture and Lactobacillus. And the third one about some common yeasts, the fourth about the #3763 Roeselare Blend from Wyeast and the last one about Kombucha cultures. I can already tell that some of the results were quite unexpected and really interesting and to finish: spoiler alert: I could isolate some Brettanomyces!